Mike Dooney and I flew back from Toronto yesterday. It was a pretty uneventful day, other than we both got to stand in line for customs with Bruce Campbell. Mike even got up the nerve to compliment him for his role on BURN NOTICE. In acknowledgement of that, Mike recieved a small smile and slight nod from the mega star. Nice.
Back to the show. The crowds were big- but not crazy big, and there were lots of costumed characters in attendance (which this show seems particularly good for). Many fans came by- some of whom we hadn't seen in a year, and some that we hadn't seen in only a few weeks. Dooney and I were squeezed a little bit- as we had in the booth space what amounted to one Artist's Alley table, but we made out ok. It really was a good show.
The panel on Sunday went fine. I'm not really comfortable in that type situation, but Mairead and Lea said that it (the panel), they thought was better than the one we did in New York, so good there. At the panel, 4Kids showed a preview of the TURTLES FOREVER animation. It was great seeing the movie again, even in this highly-edited form. And- speaking of previews, the TMNT documentary guys showed an early cut of some of FROM MIRAGE TO REALITY. It really was cool to see this early look at what the documentary is going to be like and there's some obscure nuggets of Mirage history there. Scary. 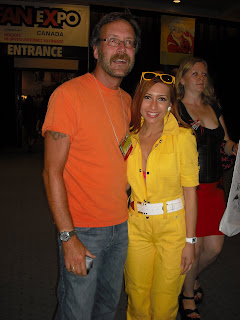 Speaking of scary, a scary hot April came by the booth. Her name is Carol Zara, and if you like what you see, more of her can be found at DigitallyBlonde.com. She really is a very nice person, and she seemed genuinely happy to meet us. Business at the booth seemed to increase somewhat while she was there...I can't understand why. 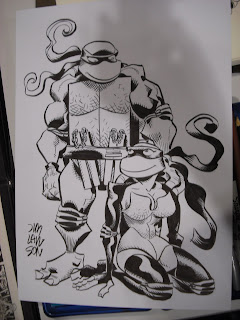 This is a commission for Coral. It's Mikey and Coral's character, who as I understand it, have some sort of thing going on. I kept it PG for the kids. 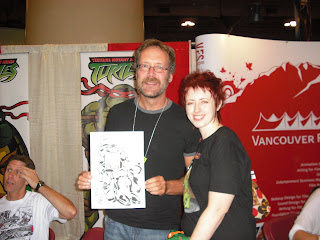 Me and Coral and her drawing. 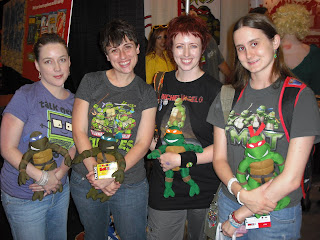 Lastly, this is (from L to R)- Mairead, Lea, Coral and Becky. I think I speak for Dooney too, when I say that it was great getting to hang out with this group. Miss you guys already. Thanks to everyone who came by the booth and yes, I got my wake up call.
Posted by Jim Lawson at 6:19 AM