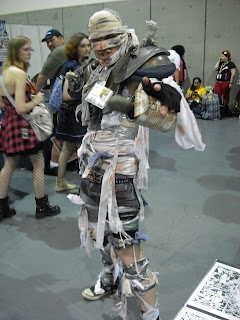 A week ago today, the Mirage Gang was on it's way to San Diego for the 40th SD Comic Con. After a 17 year absence we once again had a presence at this country's premiere comic book event.
To put it all in perspective though, the actual comic book aspect of the show seems to be waning. Now it appears that the event is more of a pop culture and multimedia showcase. There's crossover, most notably the multitude of comic book based movies that are having a lot of popularity now and to a lesser extent video games that feature the Turtles and Batman and their ilk. The sheer size of the show itself is almost overwhelming and we were very grateful that the little corner that was Artist Alley seemed to be somewhat immune to the throngs of crowds.
Lots of folks stopped by the tables to say hi or to express their thanks to the Turtles. Many of them had personal stories about what the Turtles meant to them, or how the Turtles were their introduction to the world of comics. We don't venture out to the West Coast often, so many of these people were new faces to me but many as well, were familiar and it's particularly touching to me that these fans make the effort to want to be where we are. I mean, I'm sure that we're not the only reason, but I truly get a sense that there's some kind of closeness that people feel towards the Turts. It's cool.
I had to include this picture of Tokka, who honored me on the second day of the con by showing up dressed as Rat King- the costume made complete with the inclusion of a Moto Guzzi belt buckle. Lastly, I just want to thank everyone who showed up at the Mirage tables- you guys are the best.
Posted by Jim Lawson at 6:48 AM