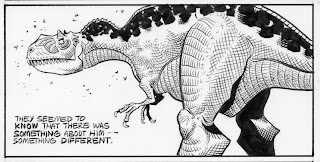 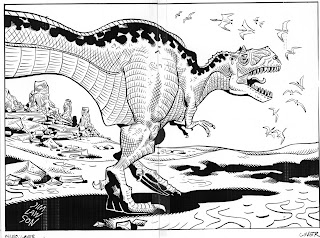 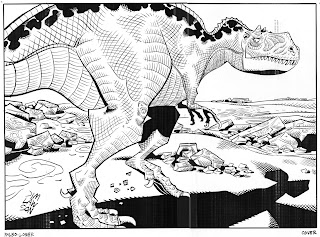 The last image is the one that I'm going to go with. I think. The similarity to the earlier image is undeniable, but it just is a better piece, as in, I'm happier with it. This will be the first Paleo wraparound cover.
Posted by Jim Lawson at 5:58 AM 39 comments: 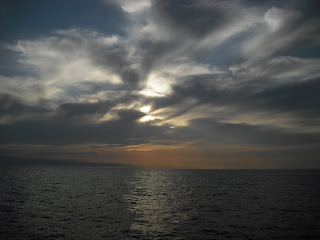 Well, I've been here. I must admit that since the beginning of the new year, I've been ignoring the blog. I'm not really sure why- I think that part of it was with the official ending of my employment here at Mirage, some of me felt like the Turtle thing was over, and what would the point be of posting anymore. Silly I suppose, but I was feeling a weird sorta melancholiness about things. The result of that obviously was that the blog went dormant.

So- I'm still here occupying my studio. The TMNT work for me ended with the completion of the pencils on Tales 70 (other than the occasional commission job). That was probably 6 weeks ago, maybe. Eric's had the art and from what I hear from Dan, the inks are due this week. I haven't seen any of the final pages for that book yet, but I've talked to Talbot a few times since, and he seems pretty happy and excited about the way it's coming out. I'm psyched.

Paleo has been my focus since. I have about 10 more pages to ink and the Loner story will be finished. Yesterday I pencilled and inked up a cover for that book. I do this weird thing where I obsess about covers, and the image that I decide I want to use... often I will draw up a cover only to do up another...and another. It's gotten to the point where it's sorta a Mirage joke. I think I've done 3 or 4 for Loner, in various stages of completion but it's my contention that this is the one I'm going to go with. Heh. I think I'll post that image tomorrow.

My schedule has been somewhat more relaxed lately. I bought an old motorcycle a couple of months back and I've spent some time working on that. It's proven to be a work in progress. I also just got back from a trip where I took a week off and rode my motorcycle down to Alabama to check out the Barber Museum. They advertise themselves as the largest MC collection in the world and it's a claim that's easy to believe. It's a geeky biker thing but the museum was really cool. Posted along with this text I'll include a sunset pic that I took on the ferry from Oracoke Island, North Carolina, back to the mainland.

I guess that's pretty much it. I'm trying hard to think of what comes next and Pete and I have talked about a few things and ideas but I'm sorta takin' it day by day. I have no plans for any shows this year unless something really wacky happens. Thanks for all the nice comments and bithday wishes, I appreciate it.
Posted by Jim Lawson at 7:42 AM 14 comments: