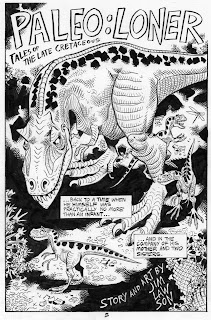 Years back, I published a comic called PALEO: Tales from the Late Cretaceous. It was a ton of fun- I love dinosaurs and I've always been a fan of comics such as TYRANT and AGE OF REPTILES. Sadly, neither of these books are published any more and PALEO has also been among them. Much like dinosaurs themselves, these types of comics seemed to fade away into non-existence.

I had a story that I wrote a while back that probably would have appeared as PALEO 9. I took this story and rewrote it and expanded it and ended up with a 72 page tale that now will be published as a TPB. I'm not sure when this will happen as the book is only half-pencilled at this point but I hope that it will be later on this year. I inked 3 pages yesterday and couldn't wait to share them. This is, of course, the title page- I'll post more as time goes on.
Posted by Jim Lawson at 6:29 AM