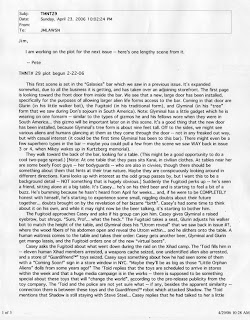 Daniel had a suggestion that folks might be interested in seeing what it looks like, when a comic is written. So, for this post, I've scanned 2 examples of scripts that have been given to me.
Pete's is the first. In my experience, what he has always done is he has type-written 3 or 4 pages of story, and from that I'll go ahead and do my thumbnails. As you can see at this point, I know very little about what the actual dialogue will be. The scenes that I draw are more or less situational, rather than knowing what the actual exchange between characters is. 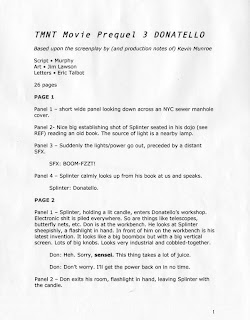 Murph is somewhat different. He will give me the actual panel count per page and often tells me what he wants shown in each panel, sometimes even with a little thumbnail of his own. Dialogue has been written to a finished, or near finished state. The book that I'm starting to pencil today is written by Berger and he writes in a form very similar to Murphy. This form of writing would be considered more industry standard, I'm figuring.
Either way, from here I'll proceed and go to breakdowns/thumbnails.
Posted by Jim Lawson at 7:13 AM