Who The Hell Is Guzzi Lemans?? 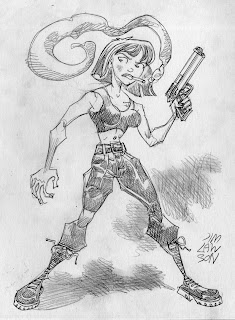 Guzzi's first appearance was in the Turtle comic, nearly 20 years ago now, I think. She appeared twice, if my memory serves- both as back up stories. I tried looking back through my old Turtle comics to find out exactly when, but those 2 stories predate the individual copies of the comics that I have.

However, if you check Issue 51 of the original series- page 13, there she is, along with what appears to be Eric Talbot and Steve Lavigne in the lower left corner of that page's main panel.

Since those early days, I've used her on and off a bunch of times. Antarctic Press even published a 2 Issue mini-series featuring her and that was when she began to transition into her current status as a character who resides in the world of post-society. Most recently, "Guzzi Lemans- Biker Chick of the Post-Apocalypse" ran as a full page comic for a New York City motorcycle themed monthly called City Cycle Motorcycle News. That particular comic ran for about 3 years, from 2000 to 2003. Problems getting paid led me to give it up, and shortly thereafter, CCMN went under. In the last episode of that comic, the Biker God, angry at how the outlaw biker style had been co-opted and marketed (by shows like American Chopper) to the point where it now had become mainstream, decides to take action. His retribution was to destroy all of motorcycling with a "God Grenade". Guzzi throws herself on the grenade, seemingly killing herself. Still, it's comics, and we know no one really ever dies.

I would like to use her again, and I do have a story dedicated just to that purpose.
Posted by Jim Lawson at 6:05 AM