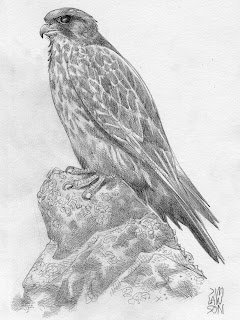 I've got this buddy, Todd, who partakes in more activities than any other human I know. But- without a doubt, the coolest thing that he does, is he's a falconer. He has trained several Red-Tailed Hawks and currently has a Harris Hawk. I've accompanied him a few times on hunts- where we are basically whacking the bushes and trees with ski poles while the bird follows us through the woods. In the times I've been with him, we've never actually had the bird take or try to take a squirrel or bunny but there is something definitely cool about being in the woods working with a hawk.
This drawing is for Todd's mentor. A falconer has to be trained by someone in order to become licensed, and Todd's teacher is retiring. Todd already has a falcon drawing of mine, and asked me if I would do his teacher one as well. This particular fellow, the teacher, raises Gyrfalcons and I know that Todd someday, hopes to get one for himself.
Posted by Jim Lawson at 6:49 AM