The Sale of the TMNTs 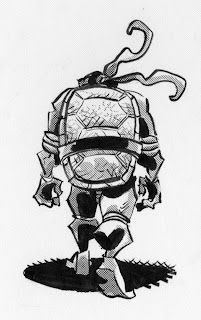 In the comment section of my last posting people were starting to write with some of their thoughts regarding the sale of the Turtles. Along with that, I've been getting emails about that same subject. Those emails- the ones that I've answered today, I've included a little form type letter, which goes as follows:
It's all true. As of now, Mirage no longer owns the Turtles. Peter though, has retained the rights to publish up to 18 issues a year of the TMNT.
For me personally, I guess that I'm no longer a Turtle artist. There was a buyout with the artists- so I walk away from here with a bit of money. What I'm going to do now, I'm not really sure. It's all too new, and my head is still spinning. Pete is going to allow us to continue to use our studio spaces, should we choose. Maybe I'll work on some non-Turtle project with Pete, if he wants- or I've thought about trying to do a children's book. Or maybe get a real job like at Barnes and Noble. I don't know....
For the immediate future, I've still got 2 comics that need to be finished and beyond that I hope to wrap up the Paleo TPB that is now, only half done. I'm excited about the changes but somewhat nervous at the same time.
---
With that said, right now I'm walking around the studio in a semi zombie-like state. I'm having difficulty processing the enormity of it all. The thought that I might not ever do another show seems odd. I was looking at my drawing table though. It's pretty much beat to shit. The legs are all wobbly from me rubbing up against it and resting my feet on it. The drawing surface has a huge spot ground into it where, it's my best guess, thousands of pages of comic art has passed by. Kneaded eraser residue has formed a disgusting slime, just off to the side of there. And I'm thinking, yeah- perhaps it IS time.
I don't know really where I'll be a year from now. I guess I'll just wrap this up by thanking everyone who has contacted me, or who has visited this blog. I believe the Turtles, and their fans are really something special and I've been very lucky to have been a part of that.
Posted by Jim Lawson at 10:12 AM