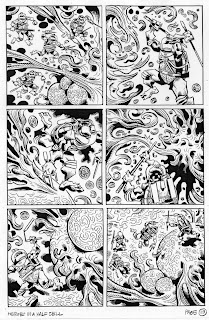 I took a break from the blog-- I think it was a combination of the official "end" of Mirage, combined perhaps with my natural hibernatory urges that occur at this time of year. Anyways, I'm still here and continuing to chip away at the ever smaller block of Turtle work that I have left to finish.

Today, I should complete the Jake Black Tales issue (68). So, with that in mind I thought that I'd post a page from that book. This is page 23, which features the guys getting it on with some nasty cancer cells. It's been a fun issue to work on- with some surreal, almost alien-like environments. Also, fun for me is that Dan asked if I couldn't come up with a little 2 page back up story that's to appear in that same issue--- tomorrow I'll try to at least to get that pencilled. I think the publishing schedule is a little off these days, but this book is due to be released in March, I believe.

Then that leaves Tales 70- my last Turtle book. I approach that issue with a really odd feeling. I'm sure once I start drawing, that it will seem normal, just like any other comic-- but it really is way more than that. It makes very tangible, the finality of this relationship that I've had with these characters. Don't really know if that makes sense but my brain has been very much in wander mode lately...

Hope you like the page.
Posted by Jim Lawson at 6:16 AM