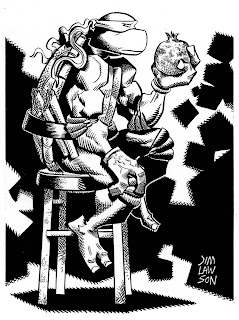 Most, if not all folks, probably know me from my Ninja Turtle work. This is a drawing that I did for a friend that owns and runs a restaurant in Shelburne, MA called THE GYPSY APPLE. In an odd coincidence, his name is Michelangelo. Hey, it didn't take much to figure out that it would be cool to do him a Turtle drawing that he could hang there. Which he has, right by his kitchen.
BTW, the gypsy apple refers to a pomegranate, which Mike appears to be looking past in the drawing.
Posted by Jim Lawson at 12:34 PM