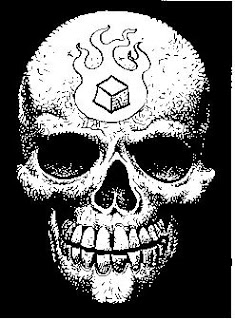 This art was originally done for the cover of my first sketchbook, TATTOO. That sketchbook was rather unfortunately named, as it would be easy to surmise that it contained tattoo art, which it did not. I just thought the name sounded cool. Also poorly named was my original blog, THE IMAGE APOCALYPSE, which now no longer exists.
Alright, coming up with good names is not my strength.
Boxburning, this blog, simply refers to a tattoo that I have on my left forearm. The story behind it is that in my drawings, I would sometimes include a little cube-thingie. I sorta adopted this cube and wanted to put one on my body. When it came time to get it, I decided to jazz it up some and some flames were just the thing to give it that little extra flair.
Posted by Jim Lawson at 8:03 AM