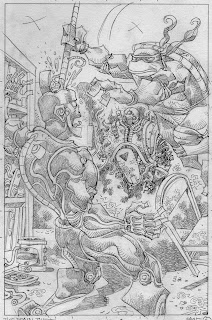 San Diego is now a dimming memory and I feel that I'm getting back into my regular schedule. Tristan's Tales issue (64) has been pencilled and put aside briefly as I begin to concentrate on pencilling the last of the Don mini books. Eric is inking on this series, and has told me on several occasions that he's really diggin' the way that they're coming out but I personally, have yet to see any final art.
I hope that I'm not giving anything away by posting sneak peaks of the art, but I thought that this page pretty much apes the cover image, which has been revealed here before.

In other news, I was originally going to go to the Toronto show, then after San Diego I changed my mind and decided that I was going to pass on it. Since then, Mirage has sort of made it clear that they want the artists to go... so with a little bit of arm-twisting I'm back on board.
Posted by Jim Lawson at 6:48 AM