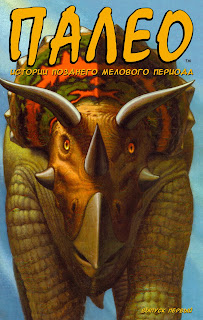 I've been corresponding with a fan named Arseniy Dubakov for a few years now. I think that I'm correct in saying that he is really into the Turtles and even self-publishes his own Turtle comic. This comic, I don't know if you'd call it a alternate take of the Turts or just a re-imagining of the Turtle universe but it's a very gritty/sexy world his version of the Mirage characters operate in. His comic is called SaiNW and issue number 3 is due out September 9. Arseniy's work has been featured here on Boxburning before- he sent me a birthday card that I posted here last February. Very cool stuff.
Arseniy approached me and asked if I wouldn't mind if he could translate and post issues from my old Paleo series, and naturally this is the cover from the first one. It just looked so cool, and he did such a nice job that I had to give him credit here for all his hard work. The comic (Paleo #1) is on Rapidshare and available for download here.
Posted by Jim Lawson at 10:36 AM