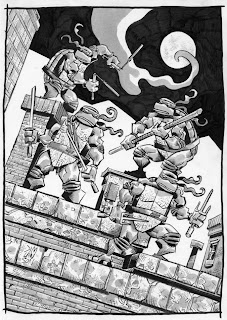 When I was in Toronto, I got a new brush. It's called a Pocket Brush, and it's made by Pentel- I thought that it might be ideal to use with the watercolors as it uses a permanent ink. I played around with it a little bit at the show, and found it to be a little tricky. It's point is long and tapered to a fine tip (good) but it is so soft and juicy that it takes a very delicate hand to get the best out of it (bad).
Combined with this new inking weapon, when I got back to the studio on Monday there was a big box of Duo-Shade paper waiting. Duo-Shade is the stuff that Kevin and Pete used to use on the original TMNT comic. It's really very cool to work on and it's neatness was kind of resurrected in my brain after the recent job that Eric and I did for Ubisoft (the cutscenes from the Turtle Smash-Up game). Anyways, I wanted to play around with both so just for fun, I cranked out this Turtle Groupshot.
Posted by Jim Lawson at 6:14 AM